The remains of prehistoric animals were discovered in Bechara. At the site, paleontologists are busy hoping to make further discoveries.

The remains of prehistoric animals were discovered in Bechara. At the site, paleontologists are busy hoping to make further discoveries.

Crossing the industrial area of ​​Bommelscheuer in the Bascharage, one notices today a large number of warehouses. More than 183 million years ago, during the Lower Jurassic, the situation was completely different.

Dozens of people from the Natural History Museum have discovered the remains of an ichthyosaur, a marine animal that lived 250 million years ago. Unprecedented discovery, one precedent dating back to the 1940s in Germany.

“At that time, southern Luxembourg was covered by a shallow sea, and the north of the country was an island,” explains Ben Thuy, a paleontologist at the Museum of Nature. The boundary between land and sea was approximately at the level of the present boundary between the regions of Guttland and Oesling. “That was where the beach was at the time,” describes Leah Numberger, who is also a paleontologist at the Museum of Nature.

But although the Jurassic Sea has long been a part of history, traces of this time can still be found today. It was this prospect that drew the team of paleontologists Ben Thuy and Lea Numberger to Bascharage.

After the recent discovery of the remains of prehistoric marine animals in the industrial area, excavations have been underway since Tuesday in an attempt to find other pieces from this distant era. Every day, about four to five people are active on the site and take part in the excavations. A large excavator is used to dig to a depth of three meters to find other remains.

Involve researchers more systematically before the land is converted into buildings: this is the will of a bill that the Ministry of Culture holds. It is up to real estate developers to adapt.

Paleontologists don’t have much time. Only two weeks, maybe a little more, according to Lea Numberger. Then the roof will be closed again, and soon a new storage depot will stand there.

Since there is no basement, such warehouses are not built in depth, which inevitably and simply leads to the roof being closed. So paleontologists should redouble their efforts by digging as much as possible to make the discoveries.

Construction on the new building is expected to begin in early June, by which time paleontologists will be able to process the rocks at the site, which consist of shale and fine-grained sedimentary rocks. “We will be able to blast and remove layer by layer methodically. We do not depend on the vagaries of the construction site,” Ben Thuy said. 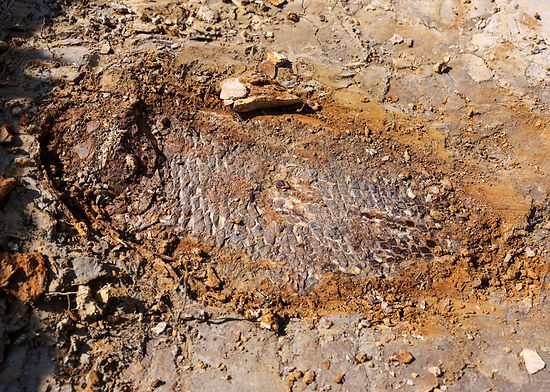 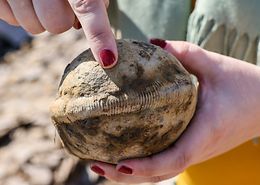 The ground was excavated with an excavator.

The ground was excavated with an excavator.

The outline of the fish is still clearly visible.

Paleontologists conduct their excavations at a depth of about three metres.

Ammonites are cephalopods that lived in the sea, which disappeared 65 million years ago.

Paleontologists have already made their first discoveries, although fossils have only just begun. Thus, the remains of fish that fell to the bottom of the sea at that time, victims of the lack of oxygen that prevailed there, preserved today in the rocks, were found.

But the hopes of specialists go far beyond these simple fish: “The always amazing thing is to find large vertebrates, such as ichthyosaurs or plesiosaurs, or even animals that have not yet been identified. Here, such as terrestrial vertebrates,” aims Ben Thuy.

Unfounded hopes, because Luxembourg was once the scene of amazing discoveries. Thus, in the 1990s, a dinosaur wing was already found in the area. Recently, last year, a team led by Ben Thuy discovered temnodontosaur bone fragments at the Cloche d’Or. Previously, the remains of such an ichthyosaur were found only once in the world.

This time around, this discovery won’t necessarily be surprising. “We also aim for things that are somewhat trivial,” says Ben Thuy. In particular, it refers to insect remains that one would not expect to find in former marine areas.

To the north of a plot, located on the road from Rombas to Woippy/Bellevue, Iron Age remains have been uncovered by the Center for Preventive Archeology in Metz-Metropole.

But researchers have already made such discoveries in Bacharaj. “We’ve found dragonfly wings before,” says Thuy. Although it may seem insignificant at first glance, these animals provide information about the ecosystem prevailing at the time.

Behind the remains, the main objective of the excavations is to collect scientific data. Thus, a Danish geochemist should join the site next week. He will work in the rock centimeter by centimeter to learn more about the climate of that time, from the chemical signatures in the rock.

Results will be presented at the end of May

These findings could also be of interest to current research, as the Lower Jurassic was marked by climate change. “It was very hot in Europe at the time and the climate was very harsh,” says Ben Thuy. Summers are very dry, spells of heavy rainfall and monsoons that characterized the climate then.

2,500 years ago, the Seille Valley, in the Moselle region, which is quiet and rural today, was bustling with activity: a local exhibition opening this Wednesday traces the life of the most important Celtic-era center of salt exploitation in Europe.

Once discovered by paleontologists, the objects are first wrapped in such a way that they can withstand transportation without problems. Then they are taken to the museum, where they are cleaned before the start of scientific processing. To do this, collaboration between experts familiar with the animals involved is essential.

On May 24, paleontologists will evaluate the fossils and will appear during the debriefing of the general information on the discoveries they made during this work.

Exhibition at the Nature Museum

183 million years ago, the region of present-day Luxembourg was still partially covered by the sea. Those who wish to immerse themselves in this world and discover things dating from this period can do so until May 29 at the Museum of Nature. The Lost Ocean exhibit is open there until May 31.

This article first appeared on wort.lu/de